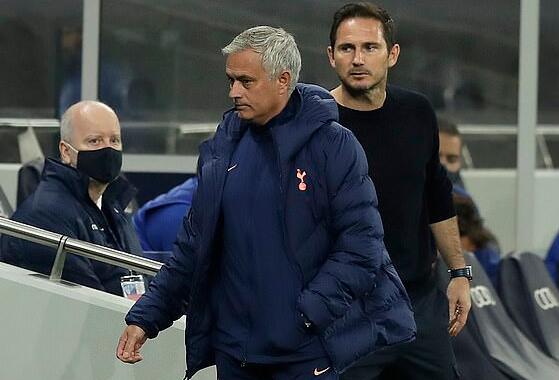 Regarding the quarrel with Lampard on the sidelines, Mourinho said that it was only a matter of the game and would not affect the relationship between the two.

In the League Cup between Tottenham and Chelsea, Mourinho and Lampard had an argument on the sidelines. Mourinho was heard saying: "Fxxxing hell, Frank, when you are behind 0-3, you don't stand here. "

After the game, Mourinho explained the situation on the sidelines at the time. "For Frank, the most important thing is my feelings for him, more important than what we say. My feelings for him is that I have been owed to him because of what he (as a player) did for me."

"When he was a player, he contributed everything to me. I will never forget it. Therefore, my feelings for him have always been owed to him. He was such an extraordinary player, friend and professional player."

Speaking of the sidelines, Mourinho: "The only thing I say to him is my opinion, just an old coach's opinion of a young talented coach, that is, when the players are behind, we need us, and when they are leading, We don’t need to be the protagonist on the sideline. We only need to go to the sideline when they are behind. They were behind 0-3 in the last game. I was sad for Lampard because he was very sad and sat quietly in his chair. In terms of football, I don’t have much to teach him. He fully understands football and is an extraordinary coach. What I say is only my opinion. When your team is behind, you have to stick to the sideline. When your team is leading, You can calm down."

Lampard also said that it was only a momentary emotion with Mourinho. "We are very happy on the sideline. I have a good relationship with Jose, and he will say the same. I said at the time that he and the referee seemed to say more to the players than he said to the players. That was just a little emotion between us. time."

"No matter what we say on the sideline, I have full respect for Jose. Everything is fine after the game. This (my feelings with him) will never change."